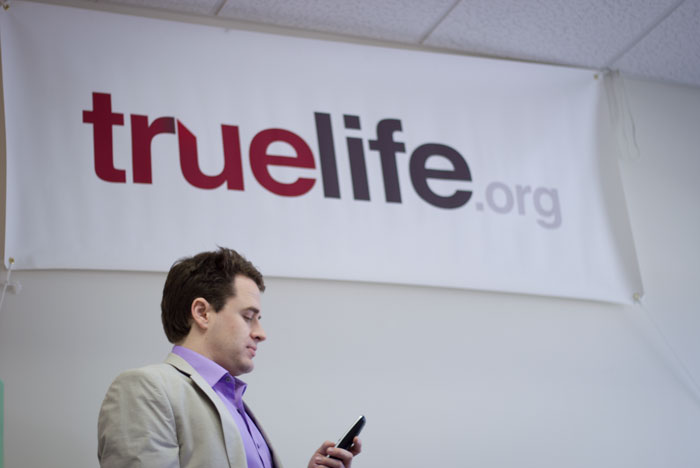 Jesse Connors, founder and CEO of TrueLife.org, grew up in a loving Christian family (coming to know the Lord at the age of six) and had an overwhelming urgency to share the Gospel with the lost even from his youth. He completed his undergraduate studies at Liberty University, where he earned his Bachelor’s of Science in Communications with specializations in Media Management, Graphic Design, and Public Relations.

While working with Dr. Jerry Falwell as a spokesman for Liberty, Jesse got to write scripts with Dr. Falwell. “We traded emails and he always had great words of wisdom for me,” says Jesse. “He believed in me. He believed in God through me, and he put me on stage to speak for Liberty.”

One afternoon, Jesse was on the phone with him working on a script, and Dr. Falwell was asking how things were going. “Little did I know he had about ten other directors of Liberty there, and I was jubilant and energetic, reading my script. Later after hanging up, I found out that someone there said, ‘Whoa, that guy is crazy! He’s got way too much energy!' But Dr. Falwell said, ‘You better be careful what you say, because people like that can change the world.‘ For Doc to say that about me was extremely humbling, because I know that I can’t do anything without Christ, and that anything I do accomplish is only by His grace and strength. Doc merely saw God’s willpower in me to complete a great task, and that served as an encouragement to me for ten years during a rigorous start-up period."

“It was soon after a speech where I was speaking in front of 50,000 people at Creation Fest 2003 that the Holy Spirit helped me realize that these 50,000 people were going to go out into a world that was going to ask them questions and test their faith, and the mountain-top experience would quickly come to an end. And in that moment, that’s when God answered a life-long prayer to do something different and unique for Christ. I received a clear picture of what God wanted and it incorporated a website with video answers on it that could bring people to church and help evangelism. It didn't have a name yet, and having any videos on the Internet was incredibly rare at that time, but I knew it was what God wanted." Right after Creation Fest, Jesse shared the vision God had given him with his close friends, and they collectively thought the name Start Living would work well because they already had a website under that title.

“When I was on the road for Liberty speaking at a Michael W. Smith concert, I met people who worked at the White House, and working there had always been a dream for me... I really love our country! I was committed to making that change so that I could make a positive impact on America.” Jesse and Dr. Falwell had kept in touch, and Doc gave Jesse his blessing to go to Washington DC, where he — through great persistence — was able to work as an intern in the White House in the Office of Faith-Based and Community Initiatives during the Bush administration, trying to create an equal-level playing field for non-profit organizations.

“The first thing I said to The President was, ‘It’s an honor to meet you, Mr. President, but I would consider it a greater honor if I could meet one of your daughters!” He laughed and we started talking and got some pictures. It was during that time period there that I really learned more about non-profits.”

Following his internship at the White House, a position opened up at FOX News (where Jesse had always wanted to work) and he quickly accepted the job. He worked with well-known media figures such as Brit Hume, Greta van Sustern, Bill O’Reilly, and the late Tony Snow. Jesse also got to know Senator McCain, Joe Leiberman, Oliver North, and many others, as they were regular guests.

Soon after he was acclimated with FOX, Jesse was offered a position working for the US Congress. His plea to the Lord throughout this time in DC was, “Please Lord, before I go into full-time ministry, let me do everything I’ve wanted to do in the secular world so that I can learn what you want me to know for the future ministry You have for me!”

God was obviously faithful with this request, opening incredible doors for him to get an insider perspective on how our country and the media is run. “I was surrounded by some of the most powerful people in the world, and I realized they were just dedicated individuals, and if I could put as much effort and energy into my work for the Lord as they’re doing for the world, I knew God could use me to make a significant impact for the economy of God’s kingdom.”

In May of 2003, while Jesse was still working for Congress, he went to One Day, which was a Passion event in Texas. While there, he was on the field with his friend and mentor, JJ Jordan (a top-gun fighter pilot in the US Navy and a high-ranking officer working in the Pentagon), along with the rest of a college-aged group of believers.

Throughout the three-day event they worshiped the Lord together, and it wasn’t until Jesse was on the plane ride home that God gave him the go-ahead to make arrangements to be in full-time ministry.

He and JJ both received very special confirmation from the Lord on the directions He wanted them to go. For JJ, that meant training missionary teams to go into undisclosed locations. For Jesse, it meant going to seminary in full-time preparation for what is now known as TrueLife.org, which became the official name on January 12, 2004.

“I remember the first time that I thought of the name of True Life at 2am, I was thinking the website would have to be taken. Well, as it turns out TrueLife.org was being sold by a domain reseller. I talked to them, told them what I wanted to do, and they loved the idea and lowered the price enough for me to buy it. I remember running up and down the stairs at my parent’s house screaming, 'I just bought TrueLife.org! I just bought TrueLife.org! Thank you Lord! Thank you Jesus! Let it always praise you!' I must have run up and down the stairs four times while my parents were sitting on the couch looking at me. They really thought I had lost it but I was certain that TrueLife.org was going to be used by God for a mighty work!”

Soon afterwards, Jesse enrolled in Southern Seminary to begin his postgraduate education, working in their media department alongside his studies. While there, he assembled a team of about ten volunteers to begin TrueLife.org. This helped with some foundational work. “I later transferred to Southeastern Baptist Theological Seminary because it was closer to home." While there, he worked as a waiter at Applebee’s. “Studying Greek and waiting on tables is awfully challenging,” he laughs. “I was blessed to later be able to work with the media team at Southeastern.”

In 2005, Jesse moved from his job as a waiter and working with the media team to working for a retirement community called Abbotswood at Stonehenge in Raleigh, NC. “I stayed at this retirement community longer than I thought I would, but God taught me more about life there than anywhere else I had worked. I learned the brevity of life, because I was around death all the time. I adored the residents; they were some of my best friends and greatest encouragers, but every night I was in charge of security, and often times I would find my friends fallen with a broken hip, bloodied by the counter they hit on the way down. I would hold their hands until emergency help would arrive. These were people I knew and loved. I remember being in tears with their families, knowing the whole time that life is but a vapor.”

Jesse shared one of many stories from Abbotswood, recounting how he was able to lead a man to the Lord even as he was dying of a seizure. He’d urged the man to accept Jesus Christ as his Lord and Savior and receive forgiveness for his sins (he was one of the first jet pilots for the US Air Force during WWII). “I told him to squeeze my hand one time if he accepted Jesus, and he squeezed my hand like this,” says Jesse, squeezing my wrist. “He had a tear coming down his face, and I knew that God was restoring him then.”

During his last year at Southeastern (while still working at Abbotswood), Jesse had launched the first TrueLife.org website featuring a video responding to the film, The Da Vinci Code, based on the novel by Dan Brown. “It was the first break for us,” says Jesse. “We were able to film Oxford scholar Dr. Michael Green and popular New Testament scholar Dr. Andreas Köstenberger.” Having these two respected professors helped Jesse to recruit other scholars for future videos.

Jesse graduated from Southeastern in December of 2007 with a Masters of Divinity in Christian Apologetics and Biblical Languages. “After seminary was over, I worked on TrueLife relentlessly. In the morning I would start and then begin work from four to twelve at Abbotswood and then when the residents went to sleep, I would go back to editing video and preparing TrueLife.org. God was really using that time in my life to help prepare me for the future. They were very formative years for me. I knew they were important, but I didn’t understand how much those lessons would help me with TrueLife.”

“I never thought that I’d be at Abbotswood for three more years, but the developmental period in my heart and life needed that time. I experienced immense spiritual warfare, and if you ever want more details on that, I can tell you, but to sum it up, there were times when my ‘Barnabas,’ named Don Smith, looked at me and started laughing and celebrating the future because we knew if Satan was going to hit this hard, it meant that God had a bright, bright future in store for TrueLife. It was amazing how even at that moment, God was able to bring such encouragement.”

In 2010, Jesse was very excited to be working with a notable figure. He was featured in a number of our videos. “I’m not really sure exactly what happened, but I knew that because of the circumstances we would have to take down some of our videos that were almost the backbone of our site at the time. This was a major setback for me personally. I thought the website was really going to take off because he was so well-known.” Fortunately, God worked the situation out for good by providing other prominent Christian leaders to take his place in some of the TrueLife.org videos. “I went first to Dr. Danny Akin (President of Southeastern Baptist Theological Seminary) and then to Jonathan Falwell (Pastor of Thomas Road Baptist Church), told them what happened, and they agreed to help us out.”

After post-production of their videos were finished Jesse began marketing TrueLife.org, and the Baptist Press did a story on the website. This propelled Jesse to finally be able to leave Abbotswood and officially begin the TrueLife.org journey.