Transcript: Is There a God? 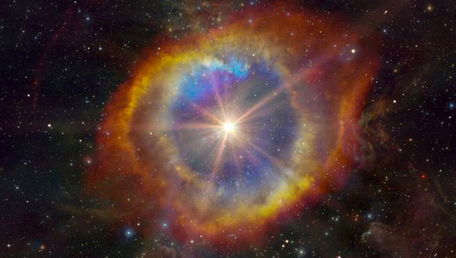 IS THERE A GOD?

“There’s not just any God, people talk about all sorts of Gods but there is only one God, one true God and I believe it to be the God of the Bible.” - Ken Ham Founder & CEO Answers in Genesis

……………God created the heavens and the earth and I believe that to be the true God the creator God of the bible.

Key Question: How do we know there is God?

Answer: SCIENCE!!! We rely upon uniformity of nature that those laws will be the same tomorrow as they were yesterday.

If the universe came about by chance random processes then if those laws just evolved how do we know they are not going to change tomorrow, why should we  rely on them?  Actually empirical science that built our technology was based upon biblical principles that there is a creator God that set up the laws of nature and uniformity of nature and the laws of logic so that we can trust them.

Young Man: “Sir, I listen to your lectures and I still believe we got here by chance random processes.”

Ken Ham: “We got here by chance random processes?”

Ken Ham: “If your process of logic evolved by chance random processes how do you know they evolve the right way, son you don’t even know if you’re asking me the right question.”

Young Man:  “So what’s that book you were telling me about?”

In 1953 two scientists who are atheist set out to prove life was built on chemistry. There is no God no intelligence behind life and they discovered heredity that today we call DNA. Well a number of years later a man named Crick wrote a book saying that perhaps aliens came and seeded life on earth.

-       Possesses both the reading and writing mechanisms needed

-       Languages only come from an intelligence

In fact what we find by observation is that languages only come from intelligence it comes from a mental process and so DNA really cries out in the beginning God.  There had to be an intelligence to make the language system, an intelligence to write the books of information.  It’s so obvious that there is a God.

“That designer could well be a  higher intelligence from elsewhere in the universe." - Dawkins

Now why did he answer that way?

Well because he said when you looked at DNA you see a signature, you evidence of intelligence he recognizes there is an intelligence behind DNA but he certainly does not want to that’s the God of the Bible, so instead he says it was some alien intelligence he has never meet, somewhere out there in outer space.

The God of the Bible is…

He had people write for us a book called the Bible in which he told us who He is and where we came from and what life is all about.  In fact in that book he tells us he created a perfect world and the first two people Adam and Eve and the first man Adam rebelled against God that’s called sin.  That’s why there is death in the world that’s why all these bad things happen over the world it’s because of what happened about 6,000 years ago Adam rebelled against his creator and because of that we’re all sinners and we’d be separated from God forever.

We are not like the animals as we know we think differently than the animals when our body dies that not the end of us we have a soul we are made in the image of God we are going to live forever either with God or separated from God but because we are sinners we can’t live with God except that God had a solution he stepped into history in the person of his son to become one of us to become a member of the human race a perfect man and he died on a cross his death was a penalty for sin, was raised from the dead and offers a free gift of salvation for those who will receive it.   So that the good news and that the message of the Christian God that the message of Christianity we call it the gospel message that everyone needs hear and respond to.

1.     How do the laws and uniformity of nature point to an intelligent designer and not some random evolutionary process? (Reference: Colossians 1:17)

2.     Why would Crick and Dawkins attribute this intelligence to an alien form another planet? (Reference: Roman 3:19)

3.     Since the God of the Bible will hold us accountable, what should we as Christians doing in a world that rejects the existence of God? (Reference: 1Timothy 4:1-5)

The Case for a Creator, by Lee Strobel

I Don't Have Enough Faith to be an Atheist, by Norm Geisler and Frank Turek

Battle for the Beginning: Creation, Evolution, and the Bible, by John MacArthur