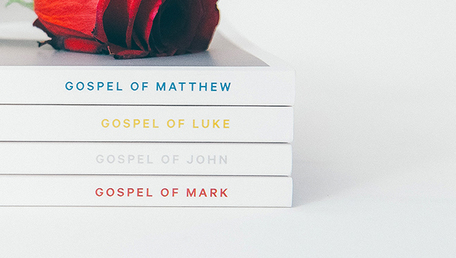 The question of the relationship between the Gospels is often discussed but not easily answered. This is especially true when attention is focused on the Gospels of Matthew, Mark, and Luke—the popularly designated “Synoptic Gospels.”

The term Synoptic means to see together or to view from a common perspective. The first three Gospels are so designated because they present the life and ministry of Jesus from a common point-of-view that is different from that of the Gospel of John, whose content is 92% unique. Further, John’s Gospel, written between A.D. 80 and 95, is usually dated later than the Synoptics, and no extensive literary dependence is readily discerned. In contrast, the Synoptics often use similar vocabulary and word order, tend to follow the same outline, and record similar material from the life and teachings of Jesus. Sometimes their accounts are almost identical. However, at other times important differences are clearly evident. This phenomena has given rise, especially in the modern era, to what is called the “Synoptic Problem” or “Synoptic Question.”

How then are we to understand and explain what appears to be an unmistakable literary relationship among the first three Gospels? Several theories have surfaced which attempt to explain these similarities. Four stand out as the most prominent.

Also known as the Ur-gospel Theory, this position was first posited by Gotthold E. Lessing in 1778 and suggests that the three biblical or canonical Gospels drew their material from an earlier, more primitive gospel written in Aramaic. Johann G. Eichhorn elaborated on Lessing’s theory in 1794, suggesting A.D. 35 as the date of origin for this primitive—though no longer extant—gospel.

There have been unfruitful and untenable ramifications of this model. Eichorn eliminated eyewitness authority for the existing Synoptic Gospels, claiming that the “primitive” gospel was written by a student of one of the apostles. This work was used as the basis for other gospels accounts prior to the writing of the extant Gospels as we know them today. Matthew, Mark, and Luke then used these gospels as the sources for their respective works, thus explaining the similarities seen within the Synoptics.

That an early gospel existed is certainly possible. However, such a theory has little if any historical support and, further, it both begins and concludes with extensive speculation. The idea originally postulated by Lessing had in and of itself one main flaw: if Matthew, Mark, and Luke drew from the same source (the Ur-gospel), why then do their Gospels differ as they do? Lessing’s theory is therefore unsatisfactory.

Eichhorn’s notion of multiple gospels succeeding the Ur-gospel creates additional problems as well. While it seems to solve the above flaw, Eichhorn’s claim that the extant Gospel writers are simply translations of non-existent, third-hand accounts undermines the authority historically given to the authors of the Synoptics. They are relegated to mere scribes void of any eyewitness credibility. Such a ramification leads to further logical conclusions which both a) compromise the integrity of the Gospels, and b) is inadequate to account for the historical data.

J. G. von Herder (1744-1803) posited the theory that an “oral gospel” or tradition of material was behind the Synoptic Gospels—that the Gospel material was passed along by word of mouth before being written down. This oral gospel would have originated with the disciples, passed along throughout Palestine between A.D. 35 and 40  before spreading outward, and was most likely used to assist the earliest preachers and evangelists. Finally, several decades after its inception, the need for a permanent, written gospel arose. This led to the writing of the Synoptic Gospels.

The necessity for a concrete gospel was two-fold: first, the disciples were aging and there was a need to secure an accurate, eyewitness account of Jesus’ teachings. Second, a unified and definitive set of teachings were needed to combat early church heresy and to serve as the foundational basis of Christian doctrine. The result was the oral tradition finally being transcribed into written form and subsequently published. The new, written material was then used by Matthew, Mark, and Luke in the writing of their Gospels, thus explaining, according to Herder and other oral traditionists, the similarities among them.

That an early, orally transmitted form of Jesus’ teachings existed is not debated. There most certainly is some truth in this theory. However, in and of itself, this theory is insufficient to account for (a) the testified existence of early written accounts (see Luke 1:1-3), (b) the different order of events discovered in the Synoptics, and (c) the variations in form, content, vocabulary, grammar, and word order that are present in the Synoptic Gospels. Thus, while not wanting to minimize the influence of a common oral tradition upon the writers of the Synoptics, the phenomena of Synoptic Gospels seems to require more than a common oral tradition.

The Markan Priority theory was not advocated until the 19th century. However, due in large to the rise of historical criticism (especially the works of H. J. Holtzmann in 1863 and B. H. Streeter in 1924), it has become without question the most popular hypothesis among contemporary New Testament scholars. This model initially began as a two-source theory, though it is now usually expanded into a four-source theory.

The case for Markan Priority primarily stems from the vast amount of material seen in both Matthew and Luke which is together repeated in Mark’s Gospel. However, there are other reasons Markan priority is commonly affirmed. First, many scholars insist Mark contains harder readings than Matthew and Luke, as the theological content of Mark is said to be more difficult. Rather than Mark taking the less complex passages in Matthew and Mark and making them more difficult, many scholars now suggest that Matthew and/or Luke edited Mark to make the readings easier.

Second, Mark is said to have the poorer Greek. Mark contains frequent redundancies, which are speculated to have been eliminated in the Gospels written by Matthew and Luke. Similar to above, it is easier to envision Matthew and Luke improving upon Mark’s Greek than to think Mark used Matthew and/or Luke and made the Greek more difficult and cumbersome.

Third, Mark’s theology is less developed than the other two Synoptics. One example of this is the occurrence of the term “Lord” (kyrios). Mark uses this term only six times. Matthew uses kyrios not only in those same six instances but also an additional twenty-four times. Moreover, Luke uses this title for Jesus even more frequently than does Matthew. Supporters of Markan priority argue that it is easier to understand Matthew and Luke adding this term to their accounts than for Mark to omit it so frequently.

Finally, Mark is the shortest gospel. While Mark contains 661 verses, Luke contains 1,149 and Matthew has 1,068. It is maintained that this can be explained easier by assuming Matthew and Luke chose to add additional information to Mark’s account than to hold that Mark omitted so much material.

Though Markan priority is the most popular theory today, this model does face a number of difficulties. Two such problems stand out as major obstacles that tend to weaken the argument that Mark was the first Gospel written. First, the early church tradition is quite unanimous that Matthew was the primary Gospel (i.e. Clement of Alexandria, Irenaeus, Eusebius, and Augustine). Virtually no early support can be found to favor Mark as the initial Gospel writer. Furthermore, much of the support for Markan priority rests upon the shoulders of the completely conjectured and unsubstantiated sources of Q, L, and M. There is currently no firm, historical evidence to support their existence. These two objections alone are enough for a number of scholars to remain skeptical of the Markan priority theory.

Matthean priority was the dominate position of the church from the first century until the Enlightenment and sees Matthew as the first Synoptic, usually Luke, who utilized Matthew, as the second, and Mark as the third. Mark is viewed as an abbreviated combination or conflation of Matthew and Luke. The preaching of Peter is also seen as a significant influence on Mark’s Gospel, though this is true for most New Testament scholars regardless of how they resolve the Synoptic Problem.

Though the Matthean priority theory was first proposed by H. Owen in 1764, it received the more popular name, “The Griesbach Hypothesis,” from its main advocate, Johann J. Griesbach (1783). It has since received a considerable revival of interest due to the influence of William R. Farmer’s publication of The Synoptic Problem in 1976.

Like the Markan priority model, significant support exists for the argument that Matthew was the initial Gospel. First, that Matthew was written first was virtually the unanimous view of the early church. The opinion of most patristics, such as Irenaeus and Origen, was that Matthew initially wrote a Gospel in Hebrew or Aramaic that was later translated into Greek. This was the view of Jerome and Augustine. Further, Clement of Alexandria stated that the first Gospel written was the one containing the genealogies. There is no ancient evidence which concludes that Mark was written before Matthew. Any such theory must overcome the overwhelming witness of the early Christian fathers.

Second, this theory can account for the literary relationship that exists among the Synoptic Gospels without postulating hypothetical documents which have little or no historical support (e.g. a Q source). The phenomenon of agreement among Matthew, Mark, and Luke is explained as follows: Matthew and Luke agreements against Mark occur when Luke follows Matthew and Mark deviates from both sources. Matthew and Mark agreements against Luke occur when Luke deviates from Matthew but Mark does not. Likewise, the agreements seen in Luke and Mark result when Luke departs from his Matthean source, but Mark follows Luke. No hypothetical documents are needed.

Still, there are reasons why many modern New Testament scholars find the Griesbach Hypothesis problematic. For example, there are certain Gospel agreements which appear to be better explained by the priority of Mark. Most of these examples are found when Matthew and Mark deviate from Luke’s account and with Mark-Luke agreements against Matthew. However, most of these conflicts are resolved when Luke is assumed as the second Gospel written. Further, Mark contains redundancies which can be explained by assuming the Two-Document Hypothesis.

While many scholars believe the Synoptic Problem has been resolved by the Markan priority hypothesis, this judgment may need to be reevaluated. The fact remains that all of our different theories may put more weight on the historical data than is fairly warranted. The early church position, though not definitive, may deserve a renewed hearing. Nevertheless, while we do not know for sure how the first three Gospels writers possibly interacted with one another or what sources may have influenced their work, we can be confident that the result of their work has given us three inspired, truthful, and authoritative portraits of the Lord Jesus Christ. They write from different perspectives and with different theological emphases, but as a whole they present a complementary portrait of God’s Messiah/King and the Savior of the World, the Lord Jesus Christ. In this all students of Scripture can confidently rest.