TrueLife.org was so thankful to have received an invitation to host an exhibition booth at this year’s annual meeting of the Southern Baptist Convention. Since they had been given such a great opportunity to inform pastors and church leaders about the difference that TrueLife.org could make in terms of their evangelistic efforts, naturally the staff at TrueLife wanted to make the most of it. TrueLife.org was blessed to be able to secure a 20-by-20-foot booth where they would host their exhibit.

The exhibit was certainly hard to miss with its four large flat-screen televisions hoisted atop a very large assembly of metal trusses and spotlights. But as visually appealing and attractive as the structure was, Truelife.org was even more pleased to be able to bring five of their top-notch staff members along to provide knowledgeable answers to the questions of pastors, evangelists and denominational executives who came by to visit the booth and find out what TrueLife.org was all about. 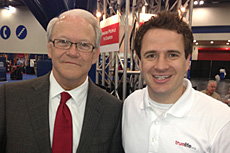 During the convention, the staff had the opportunity to share with numerous pastors how people’s lives are being changed in everyday locations like gas stations and grocery stores through the use of free, online apologetics videos, produced by TrueLife.org, featuring dozens of notable Southern Baptist experts. During the meeting, the TrueLife staff had the opportunity to see many of their friends from the SBC – convention executives like Dr. Frank Page and Dr. Danny Akin, pastors such as Steve Gaines, and Christian artists such as Charles Billingsly. Additionally, about 30 or so of TrueLife.org’s partnering pastors came by and let the staff know that their churches had experienced terrific involvement, that people were coming to Christ, and that churches were growing as a result of implementing this tool as a part of their larger evangelistic strategies. 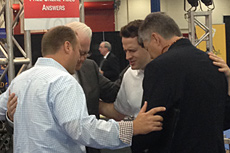 The TrueLife.org staff that were present during the convention had a fantastic time meeting old friends and making new ones as they developed new church partnerships in the ministry of the gospel. A special thanks goes out to Dr. Frank Page for graciously inviting TrueLife.org President Jesse Connors and the rest of the TrueLife team to host an exhibit at the SBC. The team at TrueLife looks forward to future opportunities to partner with leaders in the Southern Baptist Convention to help churches bring the gospel of Jesus Christ to all the everyday places people live their lives.