Comprised of approximately 450 churches from Maine, New Hampshire, Vermont, Massachusetts, Rhode Island, and Connecticut, the New England Baptist Convention has the great, God-given privilege of evangelizing the lost in one of the most statistically unbelieving parts of the United States. On the 8th and 9th of November, the NEBC held its annual meeting in the great city of Boston. With roughly 170 pastors and church messengers in attendance, it was a fantastic opportunity for the founder of TrueLife.org to make an appearance and share the impact that TrueLife is making in the evangelistic engagement of local churches. 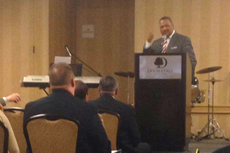 Jesse Connors, TrueLife’s Founder and President, had the pleasure, during the conference, of developing a relationship with Bruce James, Evangelism Director for the NEBC. He was also blessed to address the conference attendees during the main meeting and demonstrate to them how simple and non-threatening TrueLife.org makes every day evangelistic encounters. Connors was further given the opportunity to speak to roughly 100 people at a special evangelism breakfast, where he shared the great need for increased evangelistic activity in our churches and how TrueLife.org was uniquely positioned to help churches overcome many of the obstacles commonly encountered when attempting to increase evangelistic engagement.

There was an overwhelming spirit of receptivity toward TrueLife.org on the part of those in attendance. We’re happy to report that TrueLife.org was so very well received by the convention leadership that the NEBC has graciously agreed to subsidize half of the first year’s enrollment fees for any church in their network who desires to partner with TrueLife.org but is unable to afford it. TrueLife is thrilled to have this new partnership in place and everyone on our team looks forward with anticipation to the work that God is going to do in New England through local churches, newly equipped with our simple, innovative evangelism tool. 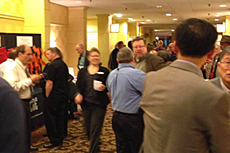 Jesse Connors was delighted to spend time with Bruce James, who is the Evangelism Director for NEBC. He said. “From the moment I talked to Bro. Bruce almost six months ago, I knew that he had understood the value of what God has accomplished through TrueLife.org. I was so thankful for a great convention, but most importantly, for the honor of ministering in such a spiritually challenged and often forgotten region. I know with Bruce James and the rest of their team, and the North American Mission Board church planters, that there is great hope for Revival. We were blessed to have some of the most enthusiastic pastors join TrueLife.org, and it is a tremendous honor to hold hands with them, and say, ‘We can do this together for God’s glory, and for the sake of those that don’t know Jesus as their Savior.’”

On another high note, Jesse’s parents were vacationing in New England during the conference and his mother was blessed to lead a woman named Alana to the Lord with a TrueLife.org card. Alana is a middle-aged woman who was a Catholic and never had experienced communication with the God of the Bible. Jesse said, “My Mom and Dad are the most precious gift I have ever been given besides Jesus. And to hear that my mother was able to lead Alana to Christ at the Monument to Our Forefathers, which was featured by Kirk Cameron in his movie Monumental, with a TrueLife card, made me shout with joy! And to think that this was at Plymouth Rock where the Lord was magnified in every way with the early settlers, and now, there is a desperate cavern filled with emptiness waiting for Jesus to fill it, and people don’t even know.” Jesse was blessed to also go to the monument and evangelize with TrueLife.org cards, thanks to Pastor Steve Thompson and his wife who are recent TrueLife.org members.