Sean handed Katherine a card with information about his church and TrueLife.org, an online evangelistic resource.

A few weeks later, Katherine emailed Sean to say thanks for the card he gave her at a gas station.

"Probably not surprising to you, one of the first videos I watched was the Jehovah's Witness video," Katherine wrote. 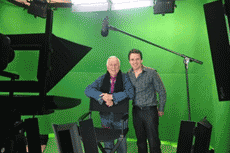 An elder in Katherine's church told her that TrueLife.org "was from Satan, and that those people posing in the video as former Jehovah's Witnesses were liars bearing false testimony," Katherine recounted. "But something in my spirit was moved though, and the source of conflict did not end for me."

Later, however, Katherine found resolution. "I renounced the Jehovah's Witness organization as a cult, dis-fellowshipped myself, and I prayed to receive Christ as my personal Lord and Savior," she wrote.

"Your obedience to God in handing me that card changed my life," she added. "If you hadn't, I would still be out there handing the Watchtower to people, and living in darkness."

The card Katherine cited is an invitation card produced by TrueLife.org on behalf of a church subscribing to its services. The church's address and other pertinent information is on the card, including a link to TrueLife.org. 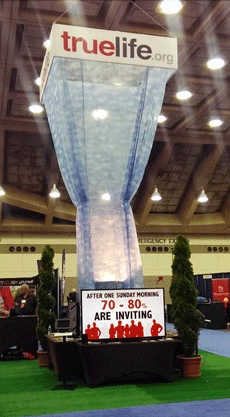 Katherine is among an untold number of people who have found forgiveness and new birth in Christ and freedom from cultic religions, sexual perversion, substance abuse and the grip of Satan -- all through local churches partnering with TrueLife.org to evangelize their communities.

Using the website's church location system, Katherine contacted a local church where she made a public profession of faith and was baptized on Easter Sunday.

TrueLife.org features many Southern Baptist pastors and professors who answer questions via video on such topics as world religions, evolution, homosexuality, pornography and the Bible's origins.

Connors said he started the site because he was burdened by the apathy toward evangelism in many churches. "And rather than just complain, I prayed, and God led me to do something."

That something is working. "We have seen up to 80 percent participation in evangelism from our subscribed churches because TrueLife.org is an easy-to-use and unintimidating tool to reach others for Jesus every day," said Connors, a member of Bay Leaf Baptist Church in Raleigh, N.C.

Since November 2010 when Baptist Press first reported on TrueLife.org's launch, the organization has enlisted more than 1,500 subscribed churches.

"If we can get more people sharing their Christian faith, then we can change the world," Connors said. "And the only way we can help our ailing country is for more Christians to do the work of an evangelist."

Not only has Connors enrolled some of the SBC's most notable churches -- like First Baptist in Woodstock, Ga.; Sherwood Baptist in Albany, Ga.; and Thomas Road Baptist in Lynchburg, Va. -- but during the last quarter of 2013 he assisted the Montana Southern Baptist Convention to sponsor all its churches in a statewide evangelism campaign.

"We gave a free one-year trial of TrueLife.org to our churches," Mark Langley, the Montana convention's evangelism leader, said, "and our baptism rate rose almost 20 percent for the year. I'm not saying that TrueLife.org was the only contributor, but the site gave our churches one more hook in the water, one more resource to help them become intentional about evangelism." 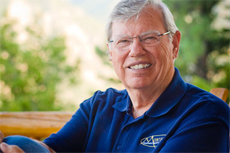 Langley said the simplicity of the TrueLife.org's invitation card "removes a great deal of the fear associated with personal evangelism. The card works also as a church outreach and marketing tool, and it associates churches with a website that offers amazingly well-done video documentaries on a variety of subjects."

"The professional-quality website connects so well with the seemingly unreachable postmoderns of our culture."

Langley said he "could not be more appreciative of Jesse Connors. He first came on his own initiative to meet with our pastors and introduce his resource. We invited him back to teach at our state evangelism conference.

"Jesse has put an enthusiastic face to this product," Langley said, "but his contagion must not be confused with salesmanship because Jesse has a genuine love for lost souls, and he constantly demonstrates that as he teaches and interacts with people. Much of the success of TrueLife.org has to be attributed to this hard-working, energetic and sincerely devoted young man." 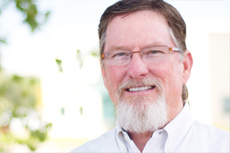 Fred Hewett, executive director of the Montana convention, added his recommendation "that every state convention and SBC church consider using this 21st-century evangelistic tool." Hewett described it as "simple to use, making it easy for a believer to share Christ without fear."

Joel Southerland, executive director of evangelism strategy with the North American Mission Board, said TrueLife.org is "a great site the local church can incorporate into its overall evangelism strategy. The videos are of excellent quality, and the invitation cards are reminders to the congregation that they should be inviting people to church and sharing the Gospel. The videos also help with difficult subjects and interfaith witnessing. Watch the video on Mormonism for a great example."

The video on Mormonism is what Montana pastor KJ Ellington recommended to a Mormon woman when he gave her a TrueLife.org invitation card. Ellington, pastor of Jordan Community Bible Church, said the woman now is "a believer scheduled to be baptized and is being mentored through a discipleship class."

Jordan is a "small, very remote community where we have less cold-contact witnessing and more in-depth personal evangelism. This has led to some of our people being scared about knowing all the answers," Ellington said, noting that the site will help local believers provide substantive answers to questions they may be asked by friends in the community.

In addition to using the TrueLife.org invitation card in personal evangelism, Connors, a graduate of Southeastern Baptist Theological Seminary in Wake Forest, N.C., noted that Christians can use it spontaneously, "whether they are standing in line at the grocery store or waiting in the doctor's office." 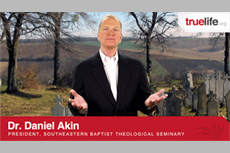 Danny Akin, Southeastern Seminary's president, said Connors as a student was "a persistent and energetic young visionary committed to the Great Commission."

"When I learned of his efforts in starting TrueLife.org, I was impressed, so I accepted his invitation to provide video content for his innovative and evangelistic site," Akin said. "After seeing our completed films, I also remember kneeling in my office and praying with Jesse that God would use him and TrueLife.org to assist local churches and their members to reach their communities with the Gospel of Jesus Christ.

"Now, after just four years, I can see so clearly how God is answering that prayer."

*Names changed. Norm Miller is a writer in Pineville, La.