On October 11th and 12th, over 2,000 people were in attendance at the 20th annual National Conference on Christian Apologetics in Charlotte, North Carolina. The yearly conference is a joint effort of Southern Evangelical Seminary and Ravi Zacharias International Ministries. This year’s conference sold out of tickets and, according to the conference’s website, was the best one to date. 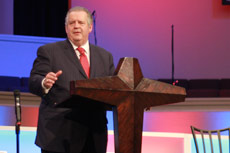 The newly installed president of Southern Evangelical Seminary, Dr. Richard Land, has recently taken the helm for the educational institution following his 25 years of distinguished service as President of the Ethics and Religious Liberty Commission of the Southern Baptist Convention. During the conference, Dr. Land noted, “Our young people’s minds are being rewired to the internet and we need to grapple it and redeem it for the Kingdoms Sake.” He then directed the audience’s attention to TrueLife.org which is uniquely positioned to do precisely that. The programs that were given to conference attendees also included a quote from Dr. Richard Land, “TrueLife.org is revolutionizing what it means to meet the lost where they are in this digital age, through the use of solid apologetic videos and an effective evangelistic strategy.” 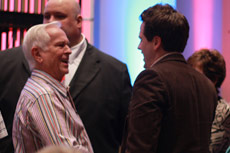 We are grateful to Dr. Land for his kind and encouraging words and were so blessed to be a part of the NCCA this year. Our heartfelt hope is that the pastors, apologists, evangelists and church leaders that were in attendance at this year’s conference will find themselves more fully equipped for their task with TrueLife’s innovative apologetics and evangelism resources now at their disposal.